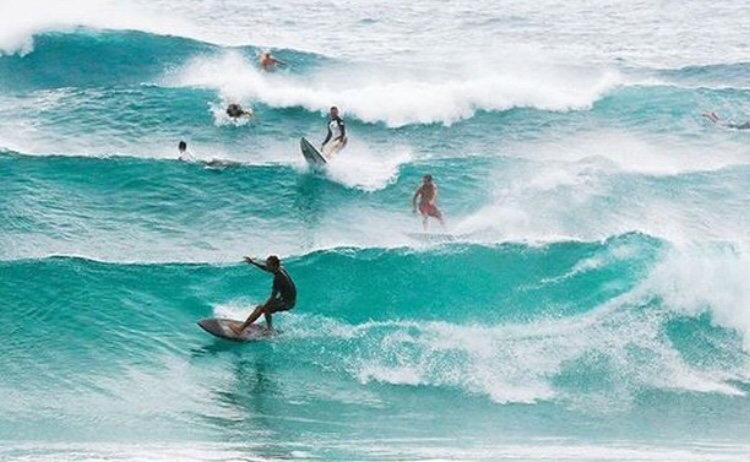 Surfers paradise gained its popular name because of it’s never ending coastline, white sandy beaches and amazing crystal clear blue water. From tourist hotspots to tight lipped local secrets, there’s more than one way to get the most from the Gold Coast. Epic eats, a thriving night life and a sick salty surf.

The Gold Coast undoubtedly boasts some of the best beaches in the world, outstanding theme parks and is flush with high rise buildings. While tourist attractions are certainly appealing, the real Gold Coast can only be discovered by meeting its locals and getting onto, into or at least near the water!

How we got there:

Flights from Sydney to the Gold Coast are getting relatively cheaper. The key to finding cheap flights is being flexible with your dates and the actual time of day you fly. While booking flights I made sure to avoid peak holiday periods. Choosing to travel during shoulder season will also be sure to save you a pretty penny. I’d normally find suitable flights on Skyscanner and then book directly through the airline. Flying with budget airlines such as Jetstar and Tigerair we encountered no problems, however, it was an extremely short flight. Conor and I both slept on each flight so we’re probably not the best judge of character!

After arriving at the tiny airport we decided the easiest route to our accomodation was via Skybus. It provided plenty of entertainment with an outgoing bus driver dropping each of us off at our designated accomodation. It took around 45 minutes.

The main reason we decided on surfers Paradise was to enjoy some sun, fun and relaxation in a location neither of us had been to before the arrival of winter in Sydney. Vibe hotel, found on booking.com was centrally located bringing ease of access to all corners of paradise. It’s outdoor pool, overlooking the river provided an astonishing backdrop for mind boggling sunsets. The staff were friendly and helpful, giving us tips on must go to bars and events taking place. We bumped into Kevin, a friend from home who was also staying there the very same weekend, great minds think alike eh!

The Gold Coast is Australia’s number one holiday destination with endless things to do. Surfers paradise has always been known for its night life. To be completely honest, it is pumping, but we expected it to be more of an Ibiza, Magaluf vibe, which it was not.

Hire a bike, pound the pavement (I did). We cycled the Gold Coast Oceanway experiencing the broad network of pathways along the coast, ranging up to 4km long. It’s extremely popular with runners, walkers, cyclists and tourists. Take in the magnificent coastal views, take a dip in the many beaches along the way. Take care not to cycle over or into any drains along the road. Your bicycle WILL get stuck and you WILL go head over heals. It happened to me… not a pretty sight, even if conor did get a great laugh out of it!

Hit the Gold Coast beaches, I know, pretty obvious, but you can’t beat a good beach day. Why not hit up one of the beaches along the 57kms of pristine coastline. The beaches happen to be home to some of the worlds most famous surf breaks. Our favourite beach by far was Broadbeach- towards the northern end of the coast. A long, clean stretch of beach, bordered by grassland. Buzzing with surfers, paddle boarding, kite surfers and weekend markets. Perfect for people watching!

Experience the Gold Coast festivals and events. There are several free events and festivals held throughout the year celebrating music, art and sports. While we were there they were rigorously setting up for the Quicksilver pro surfing event. A chance to watch the worlds best male and female surfers battle it out at one of the worlds best surfing spots. Even the lead up to the event housed an energetic, vibrant atmosphere. If only we had visited a week later.

With an early rise we started our first day off in the best possible way by watching the sunrise over the ocean on Mainbeach. Throw in the surfers doing their thing in the morning swell and you’ll be mesmerised just like we were. All you need then is a coffee and you are ready for the day ahead. Vibe hotel was a great spot for sunset drinks as we watched the sky light up in the distance behind Surfers Paradise skyline.

Ride jet skis, get your thrill on a jet boat, spot migrating humpbacks, go dolphin spotting, explore the waterways on a fun aquaduck safari, take a river cruise or take a paddle board or surfing lesson. Conor and I went on a jet ski safari, hiring our own jet skis as part of a group tour to explore the wild blue ocean and the hidden islands of surfers. It was a windy, wet morning, which only added to the experience. Big hairpin bends, peddle to the metal, full throttle ahead. Our guide Geoff was great, a true Aussie. We had a half hour safety brief (a little over the top if you ask me) but safety first and all that, before spending over an hour on the water. We had numb bums by the end!

Having been told about the spectacular 360 views on offer in Surfers we hopped in a helicopter to take full advantage. It was amazing, breathtaking views of the coastline. It was just far too short. Another way to take advantage of the mind blowing views would be to rise 77 stories up to the Skydeck observation deck atop the Q1. Grab a cocktail from the bar and feast your eyes on vistas from Byron Bay, across the mountains and up to sea. The extra brave can get harnessed up to climb even higher on an adventure to the Crow’s nest. See if you can spot any whales while you’re up there.

Who doesn’t love a peak in the shops while exploring somewhere new? Cavill mall is steeped with attractions to add to the checklist. The interactive infinity attraction will bend your mind with illusion based special effects. Simulated skydiving at iFly is extremely popular so I hear. A possibility for a rainy day! On a hot sunny day markets are more appealing in my opinion. Check out Surfers Paradise beach front markets at mainbeach. It’s home to over 100 stalls and runs every Wednesday from 3-8pm.

After all that exploring you’ll be ready for a decent feed. We headed to Loose Moose in Broadbeach for an American style feast. We started off with loaded fries, then filled up on their incredible burger and steak before washing it all down with their specialty drinks, whisky, craft beer and gin. Loose Moose is busy, loud, it’s happening, there’s so much going on in one small location, making it extremely buzzy and unique. We missed out on tickets for Dracula’s Caberet, it’s extremely popular and we were not at all organised. A highly sought after comedy dinner theatre with a dark, gothic theme. The Island hotel and rooftop bar is popular amongst the locals. You can sit back under the stars with a cocktail in hand. The house of Brew’s is where it’s at for beer, whiskey and rock n roll if that’s what takes your fancy.

Go on, book your trip! Whether the beach calls your name or you’re after adventure, the Gold Coast awaits.